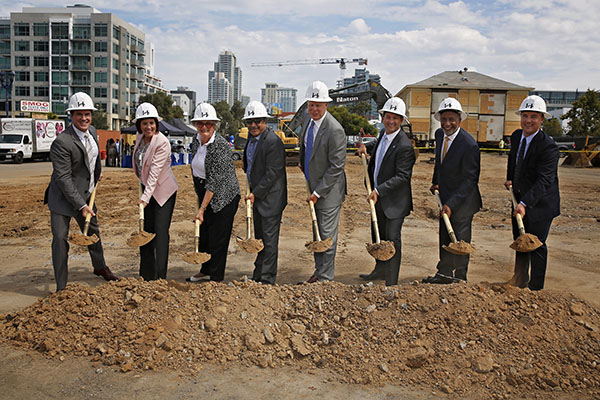 UC San Diego broke ground on a state-of-the-art facility at the corner of Park and Market that will connect the university to the downtown innovation community and to diverse neighborhoods throughout San Diego’s urban core. The university’s four-story, 66,000-square-foot facility is part of a larger development with Holland Partner Group that will include a 34-story residential tower, an outdoor amphitheater and public open space, which will host a variety of community-engaging events, and the restoration of the Remmen House, a historic property that will serve as a restaurant. The residential tower will have 426 units of which 85 will be rent-restricted affordable apartments for very low-income residents.

To usher in this new chapter for the university, the Chancellor Khosla and Mayor Kevin L. Faulconer  were joined by Councilmember Chris Ward; Mary Walshok, dean of UC San Diego Extension; and Reese Jarrett, president and CEO of Civic San Diego, as well as by more than 150 civic and business leaders and community members.

“UC San Diego is committed to being a partner in helping grow the regional economy in ways that provide opportunity for all,” Khosla said. “This new facility will bring the university to the community, connecting us in new and profound ways. This urban location embodies the university’s commitment to break new ground in providing educational access.”

Khosla added that a key reason the university selected the site was because of its proximity to the UC San Diego Blue Line, which will run from San Ysidro to University City and connect its main campus in La Jolla with the greater San Diego region.

Mayor Faulconer said that having UC San Diego downtown would energize the East Village and surrounding neighborhoods by providing educational and cultural amenities that will bolster downtown’s burgeoning innovation economy.

“There’s no better place for UC San Diego to spread its wings than downtown – one of the city’s most creative places for entrepreneurs and innovators.”

The development is expected to open in 2021.